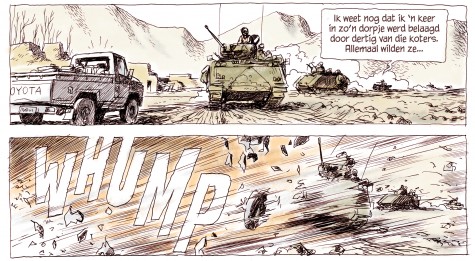 I was one of ten Dutch comic artists that were asked to participate on the comics project ‘Op Missie’ (On a Mission) A selection of ten different veteran’s stories taken from Dutch military history, from WWII to Korea, to Indonesia, The Balkans, the Middle East, Afghanistan and Somalia. Each of the artists developed a five page story out of a personal interview with veteran soldiers that were involved in aforementioned conflicts. The book was published on October 11th 2014 and is available for the general public as well as being part of a school project, teaching children about the various ways in which the Netherlands was (and is) involved in international military conflicts. What appealed to me immediately was the personal story of the service men directly involved. I interviewed ‘my’ veteran, Mike van de Vondervoort, for over two hours and I’ve tried to convey his gritty tale of high tense combat unto paper. I’m pleased to say he was very happy with the final outcome.  Due to the rather tight deadline the publisher had set for us, I tried a new approach on this particular story and drew the entire thing using a black ballpoint pen. This technique saved me a lot of time on the one hand, whilst allowing me to evoke the grittiness of combat and bristling detail of military hardware on the other. I was very pleased with the end result and I will hopefully get another chance of using this technique again sometime soon. The book is available only in Dutch I’m afraid. Below you can see Mike, the protagonist of my story, proudly holding the book as well as a few sample pages. 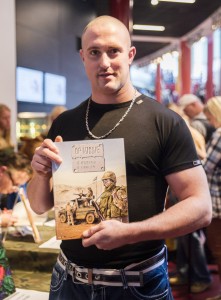 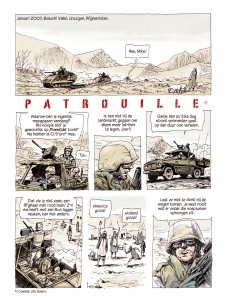 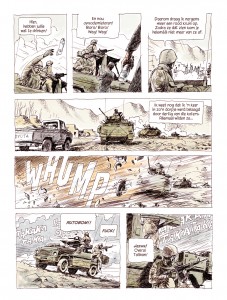 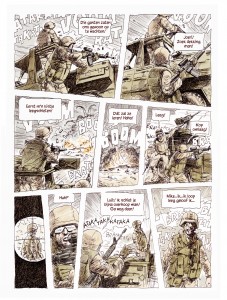