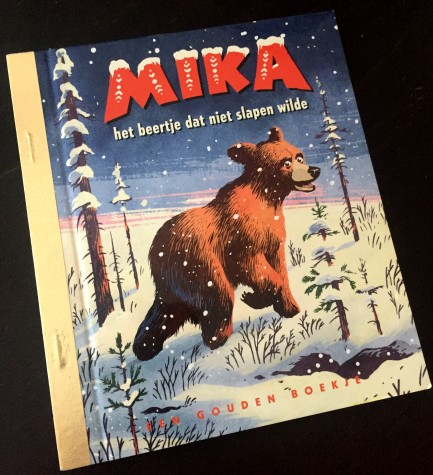 Mika, the little bear that didn’t want to sleep

A printsly gift!
The Exile

My first outing as an author of children’s books was recently published here in the Netherlands. It is called ‘Mika, the little bear that didn’t want to sleep’ and is part of the classic Little Golden Books series, published by Rubinstein books here in Amsterdam. They own the franchise of the original classic Golden Books, which they keep in print, but they also keep adding new books to the series. I already had illustrated a few, but this is the first one I have written as well as illustrated. I had never ventured into this field before in my career, but I must admit it really was a lot of fun to write and draw. Originally the idea came to me to introduce my (now 8 year old) son to the landscape and animals native to my partly ancestral country of Finland, the country my mother hails from. The animals featured in this book, e.g. Crane, Elk, Wolf, Wolverine, Great Grey Owl and of course the Bear, are all very much ingrained in Finnish culture. The story is centered around the fact that Mika, the little bear, wants to stay up throughout the long winter’s night to seek for the Aurora. He has been told by the Great Owl that it’s supposed to be quite the spectacle. The story relates of his midnight quest for said Aurora and what happens when he finally gets to see it. I was well pleased and so was the publisher. They were, in fact, so pleased, that they have commissioned me to do another, bigger children’s book this year, based on a monster/horror theme. I somehow have garnered the reputation for liking scary things. There’s no escaping it it seems… I’ll keep you posted when I have some news regarding that project, which is slated for autumn 2017. As for Mika, look for it in the special Golden Books display of your local bookstore. Out only in Dutch I’m afraid!

« A printsly gift!
The Exile »
« Back to front page