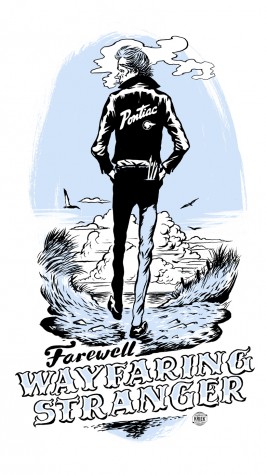 Last month one of Holland’s greatest cartoonists, Peter Pontiac, died after a long illness. We all knew he was very ill and that it was only a matter of time before he would go, but still the end came way too sudden. I grew up gawking at his meticulously drawn portraits of rock stars, which were published weekly on the back cover of a rag called ‘Muziek Express’ which I stole from my elder sister. When I was much older I was in the happy circumstance of meeting him in person and we subsequently became friends. I’m glad and honored to have known him personally. He wasn’t only a great artist, his work was very influential and an inspiration for many artists of my generation,  but  he also was a very warm and generous human being. He is sorely missed by his loved ones and his friends and colleagues. I made this drawing of him after he passed. It was published in a big national newspaper here in the Netherlands, the NRC. Farewell Peter!

« Seasons Greetings
A beautiful day »
« Back to front page