Erik Kriek (1966 – Amsterdam) studied illustration and graphic arts at the Rietveld Academy for Art and Design in Amsterdam. Ever since graduating in 1991 he has been working as a free-lance illustrator and his work has adorned almost every printable surface one can think of ranging from skateboards, snowboards, posters, record sleeves, sneakers and of course books and magazines. He has also achieved (inter)national acclaim as a comics author for his ongoing ‘silent’ comicbook series Gutsman, stories centered around a faux-superhero and the troubled relationship with Tigra, his scantily clad girlfriend. In 2006, Gutsman was even brought to the stage as a ‘silent’ music-theatre piece, combining both dance and mime. In 2008 Kriek received the ‘Stripschapsprijs’ for his entire oeuvre.

Kriek’s style is often described as having a feel for ‘post-modern irony, infused with a retro-comic, pop-culture sensibility’. His fluid brush style imagery appears in (and on) a large variety of media. A large portion of his work consists of editorial magazine and newspaper illustration, published in and outside of his native Netherlands.  He has also designed and illustrated theatrical and movie posters, book covers, CD sleeves, commercial logotypes, teeshirts, postcards, skateboards, snowboards etc. In 2009, sneakers carrying Kriek’s specially designed graphics were released by Onitsuka Tiger, celebrating the Japanese company’s 60th anniversary.

Kriek’s most recent publications include a comic-book adaptation of several short stories by SF/horror author H.P. Lovecraft, published in 2012 and a collection of murder ballads adapted to comics called In the Pines from 2016. The books have both been well-received by critics and readers alike, and have since been translated into English, Spanish, French, German, Italian, Swedish and Serbian. In the Pines received wide acclaim everywhere, won several awards and was adapted to a full-length multimedia-theatrical piece by The Brussels Jazz Orchestra. It also garnered considerable attention from Hollywood and is currently being developed for television. In 2019 Kriek published his first full length graphic novel called The Exile. It has so far been translated into French and German, and more translations are underway.

Erik Kriek lives and works in Amsterdam, the Netherlands, together with his girlfriend Stans, their son Clovis (born in 2008) their Siberian cat called Whiskey, an ever expanding collection of toys and boardgames, as well as 8 banjo’s…. 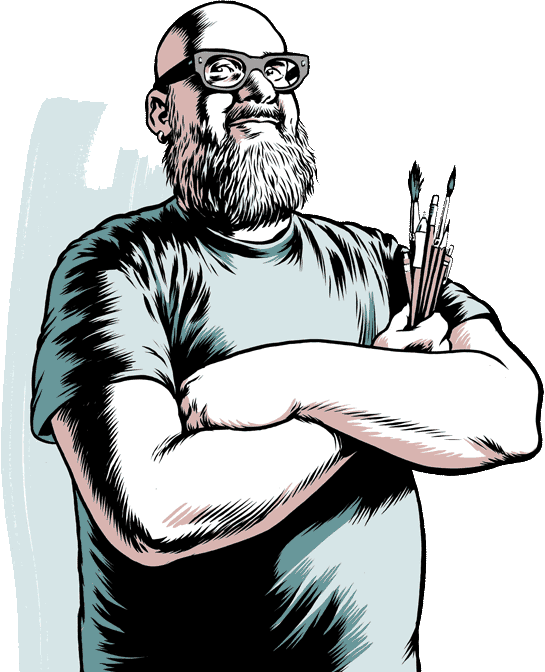